WHEN THE SKY IS FALLING

Young children are naturally curious about nature and specially fascinated by the events that take place in the sky. The objective of this six-week project was to make children aware, observe and arouse curiosity about certain patterns and phenomena that takes place in the sky such as the occurrence of day and night, changes in the shape of the moon, position of the sun in the sky at different times in a day and star constellations in the sky which are pictures made by the stars in the sky.

Who are our friends in the sky and what do they do the whole day?

The theme commenced with the story, ‘The Sky is Falling’ which was narrated to the children using puppets. This was followed by a discussion on ‘What all do we see in the sky’. Later, children understood the difference between a day sky and a night sky with respect to the colour of the sky during day and night. They then saw a video where they observed the changes in the colour of the sky as well as the position of the sun in the sky from dawn to dusk, before observing the same phenomena in reality. The rotation of the earth which causes day and night was demonstrated in the class. Children learnt about the sun as an important source of growth, light and heat and about the phases of the moon and constellations through stories and video presentations. Besides identifying the constellations that are seen in a night sky, children used their imagination to create and name their own constellations later in the class. Creating the ‘Phases of the Moon’ using biscuits and sequencing them in correct order was enjoyed the most by the children. Besides stories, videos and rhymes, hands-on activities like observing and measuring their shadows at different times in a day, tracking the phases of the moon and looking for constellations in a star-lit sky helped in making their learning concrete and deep. Children made their own first-hand observations which they illustrated in the form of pictures in their ‘Observation Journal’. The end product was this ‘Observation Journal’ which was presented by the children in their Theme Culmination Event. 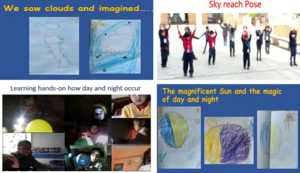 The culmination event was held on 9th March 2022, where children presented their ‘Observation Journal’ and thoroughly enjoyed participating in various activities which showcased their learning throughout the theme. The activities such as riddles, quiz, rhymes and Stretch Time included a ‘Moon Walk’ and Yogasanas related to the moon and stars such as the Half Moon Pose, Star Pose, Sky Reach Pose and Rocket Launching Pose.

At first it seemed a difficult theme to be explored by the Ankur children as children at this age are more fascinated with the imaginative stories related to the moon and stars. They are hardly aware of the real phenomena. But, as the theme progressed, children started to keenly observe the changes that take place in the sky. The changes in the sky from dawn to dusk, the changes in phases of the moon in a fixed pattern and the pictures formed by the stars in the night sky fascinated the children. Not only did they discover the answers to the questions that were posed in the beginning of the theme but they also explored answers to some thought-provoking questions like “Why is the earth tilted?”, “Where have the dinosaurs gone?”. Children had fun ‘discovering’ dinosaur constellations in the sky!