OUR LONG WALK TO FREEDOM

The project ‘Long walk to freedom’ aimed to highlight the contributions of our freedom fighters many of whom laid down their lives in the struggle. What makes this project unique is that the students did a role-play as freedom fighters to gain a historical perspective. This encouraged them to appreciate the need to live together in harmony and peace and to ensure social justice. The students were divided into groups of social reformers, moderates, radicals, revolutionaries, the Azad Hind Fauj and the Indian National Congress, and each group was assigned a freedom fighter to research on. The students took ownership of their research and as they held online discussions in breakout rooms, saw related videos, learnt what goes into making a PowerPoint presentation and videos, their understanding about the subject also deepened.

What does our nation’s freedom struggle teach us?

We started the PBL journey by watching a video on the freedom struggle of our country. It ignited their curiosity and desire to learn more about what motivated those fighting for the freedom of our country to leave their comfortable lives and battle the mighty British. The PBL driving question was discussed and the students were divided into groups of Social Reformers, the Indian National Congress, Moderates, Radicals, Revolutionaries and the Azad Hind Fauj. As an entry event, each group chose a freedom fighter belonging to their group to collect information and make a presentation as part of the virtual museum of freedom fighters.After gaining a clear idea about how they wanted to give their presentation, the children sat down in small groups to decide each member’s roles and responsibilities. Some of them became researchers who collected information, some became IT experts to collate the information into a PPT, while some chose to be graphic designers for designing posters. They structured their presentation and started submitting the PPTs and artwork needed for the virtual  museum. The students enjoyed working within the groups in the breakout rooms. They collaborated, brainstormed and finalized the content of their presentation.Our learnings about the freedom fighters expanded beyond EVS to other subjects too. For instance, in English the students made a newsletter titled ‘Ignited and Inspired By our Freedom Fighters’. In Hindi they attempted a choice board on freedom fighters, where they wrote a poem, an inspiring anecdote, or some interesting facts. In Math while learning about Perimeter and Area’ the students located the Indian states on a map where our freedom fighters were born and also found the areas of each of those states.During the course of our study, the students learnt about important national leaders who fought for our country’s freedom and made people aware of their rights and their power. We took a virtual tour of the Sabarmati Ashram, watched documentaries on freedom fighters  and  also constructed a timeline of India’s freedom struggle to learn about our long path to freedom from 1857 to 1947.Interaction with the subject expert Seema Ma’am, who took us through the various movements started by Gandhiji like Non- Cooperation, Civil Disobedience and Quit India helped the students in clarifying about Gandhiji’s role in our independence struggle. 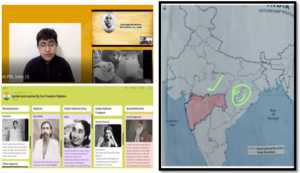 The students made presentations on a number of freedom fighters belonging to the groups of social reformers, moderates, radicals, revolutionaries, Azad Hind Fauj and Indian National Congress. The ‘Virtual Museum of Freedom Fighters’ was presented in the form of a PowerPoint slide deck.

Post the group presentation there was a pop-up quiz, which saw enthusiastic participation from parents which also motivated the student ‘quiz masters’. After the quiz we ended the culmination by thanking the parents for their overwhelming support and participation and encouraged them to fill the padlet to share about the freedom fighter who inspired them the most.

What I enjoyed the most about the project was the collaboration displayed by the students during their online Zoom meetings, helping each other on how to research on relevant topics online (under supervision), prepare PPT slides, share their learnings and take feedback from others (peers and teachers). They understood the need to value the freedom obtained by our great freedom fighters with tremendous sacrifice and to keep our country united. It was amazing to see how they solved their problems amongst themselves when there was a difference of opinion, the way they agreed to take up responsibilities for the group presentation and prepared the slides which reflected their thorough understanding of the topics learnt.