This project attempted to understand India’s urban waste problem by analyzing and representing data collected during a plastic audit of NiBS and its neighbourhood. The project complemented the school’s ongoing ‘SEWA’ initiative, where each class engages with a socially relevant problem and thinks of ways to solve it.

How can mathematical data be used to comprehend and provide solutions for real-life, multi-sided problems in our surroundings?

Activities
Students were introduced to the problem of urban waste in India, by watching a TV report on Indian cities that manage their waste successfully. This made students realize that:

After this general exposure, students decided to focus specifically on the plastic waste problem. To gauge the extent of the problem first-hand, the students did a plastic audit of the School campus and its neighbourhood.

The door-to-door survey, conducted by 5-6 students at a time, included the residents of a neighbouring housing colony and a local restaurant.
After the survey, the raw data collected was collated and analysed. Though team members had different roles and responsibilities, students worked collaboratively to choose the best way to graphically represent the data from the plastic audit.

Students then prepared an audit report of the findings.

Students wrote an audit report and presented it to the school community. They also conducted an exhibition of substitutes for single use plastic products.

Multi-level immersive activity throughout the project inspired the students to go a step further by producing a street play on plastic pollution. 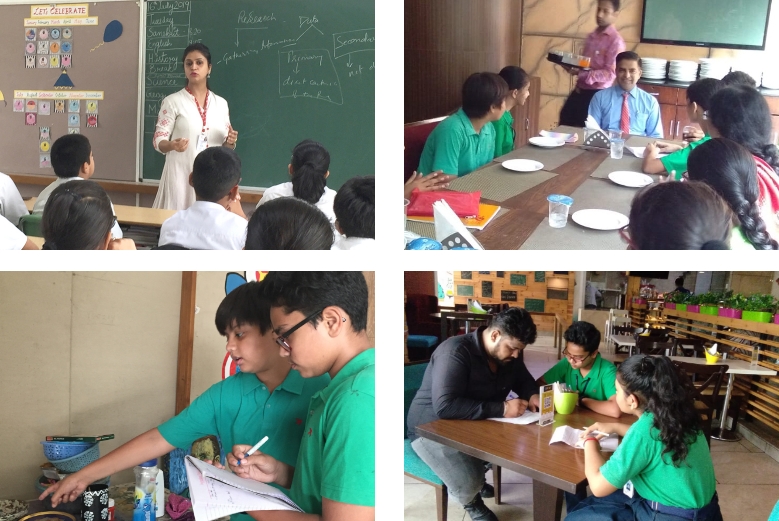 A workshop on statistical concepts was held by a statistician for the students. This covered data specific concepts like frequency distribution, probability, chance and probability through examples. Students were taught how to design a questionnaire and conduct a survey. They also learnt how to represent and interpret different types of data in single and double bar graphs, histograms and pie charts.

Additionally, students refined their writing styles through a writing task, by interpreting a graph of the waste generated by the three leading industries in the state of Delhi.

In another activity, the students got an opportunity to appreciate the power of popular music to convey messages. Listening to a viral song, about the beach cleaning effort by a well known citizen in Mumbai, made students realize the effectiveness of communicating with passion about environmental issues.

At the commencement of the project itself, the idea of initiating positive change in the environment as whole, enthused the students. Their faces shone with pride as they performed the street play on plastic pollution, which was written, directed, and acted all by themselves.

A heartening outcome of the project was that my students now avoid using single-use plastics, recycle properly, and participate in clean-up processes. They discuss the impact and implications of plastic usage and support organizations addressing plastic pollution.